The Mayor of Mukono Municipality in Uganda – George Fred Kagimu – sat down recently with The Challenge Initiative (TCI) to discuss his experience working with TCI and the changes that have occurred as a result. The following are keys quotes from that interview. 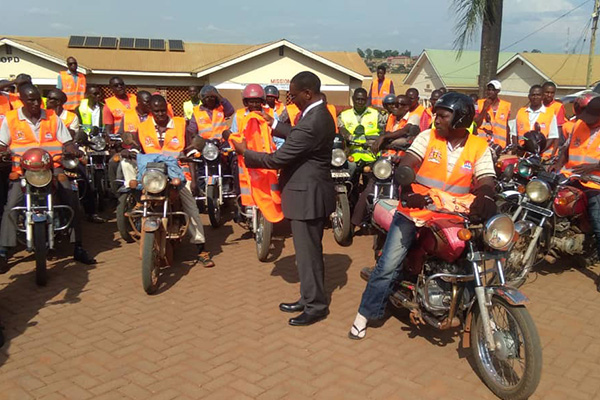 Mukono’s Mayor (center in suit) believes targeting men with family planning messaging is important. Here he meets with Mukono’s many motorcyclists to help champion the cause.

When this program [TCI] came in [to Mukono Municipality], I was a little bit pessimistic myself. … I thought most probably the community wouldn’t accept it. I was looking at it from the angle of a region who are predominantly Catholic, Christian, and Muslim, from a traditional culture. I thought most probably we are bringing forward something that is going to get conflict from the community, conflict from the Church. Personally, I had some other objectives. Being a political leader, I knew that I had been challenged because I didn’t have sufficient health facilities for people. And in my municipality where we had about 200,000 people, the estimated statistics are that in less than 10 years our population would more than double. We are located at the busiest highway in Uganda that is connecting Uganda and Kenya. We are only 20 km from Kampala. We have immigration from the eastern part of Uganda, they tend to settle in the smaller town next to the capital, in my town. To make it worse—but it’s a good opportunity—in the coming five years we will possibly have 150 or 200 factories coming into the municipality. Many people come waiting for jobs. Because that challenged me, I easily bought in that if we could manage the population, then we could achieve better health for my people and also maybe the population wouldn’t increase at the [same] rate. Also, I was convinced the quality of life for my people would improve and families could bring up children that they could manage.”

Another thing that motivated me is that TCI was coming with a contribution [while] expecting a local contribution. That motivated me because being a municipality with very limited resources, I knew I wouldn’t be able to extend those health services alone as a municipality with our local budget, so I was extremely excited to have a partner like TCI that is coming up with the financial support and also the expertise … There is a limit to what we can put in, not because we may not find funds but because when we put in more money for reproductive health, we affect the money that we can put in for other health services. … We can continue this work on our own once the central government buys in, because if the central government buys in they will increase the grants accordingly. As we move forward and build capacity, and get many stakeholders to be convinced, then we can move on our own. Also, very interesting is the way that people are engaged in this program, they are able to assimilate us, especially me as the mayor, to ensure that every activity they do I’m informed and I participate. Many people are confident in the program because of our personal participation and involvement.”

Seeing Improvement in the Number of Family Planning Acceptors

We have also made some kind of innovativeness with my team. For example, we get an opportunity to sensitize every mother coming for antenatal services on reproductive health. As a result, we’ve had about 50% of the mothers accept to use a method. … If the mother comes with a husband, he doesn’t have to line up. He is given priority, a first-track line. That way the mothers know when they come they won’t have to wait in a long line and we can get the husband to be informed about this intervention. When the husband buys in, it becomes very interesting and can be easily sustained. I was looking at the figures … Our rate of birth has been increasing at a rate of about 10% to 15% each year. What is surprising is that the number of births this year compared to last year seems to have a turning point. It appears that they’re going to be below 10%. We still have to analyze [the data] but I’ve seen that indication. … Another thing is that acceptance [of family planning] by women is going up. Another one is that young people are more interested in knowing about family planning. … [Community health volunteers] have seen a new area of interest … they come back with questions from the community beyond family planning, more health issues that people are posing. This initiative has opened our eyes to some other needs that we hadn’t focused on. When the volunteers go into communities, people ask them about immunization, about malaria.”

A Need to Expand to Health Areas Beyond Family Planning

Our challenge today is that as much as we are advocating for family planning, there are number of other health challenges that mothers have especially in the areas where we are delivering this [family planning] service. When they come, they don’t only come for reproductive health services. They come more for antenatal services, which includes delivery of babies. But when you look at the actual services that are being delivered, there are quite a lot of things that need to be done in that regards. For example, in some of my health centers, 20 to 30 mothers are delivering babies, but they are using only three delivery beds, with very few attendants. … It’s extremely important to take a good look at the other related services, especially maternal services. A cost-sharing program could help with the improvement of other services.”

Focus Should Include Adolescents and Men, Especially Motorcyclists

We need to put a lot more emphasis on youth, the adolescents. We are happy that TCI has looked into that and has good programs for that. In my area, we have started in that direction and it has been quite effective. There is also an area on the side of men that needs to be worked on. The focus has been more on mothers and young ladies. But we need to start thinking seriously about [men]. For example, we have a group of motorcyclists that every day is increasing in numbers. Maybe doubling in numbers. In my municipality, we are talking about 5,000 to 10,000 motorcyclists. What do they do? They have a very good opportunity to come into contact with ladies, because they are clients on a daily basis. The majority of them are young ladies. … We have found that the motorcyclists have quite a number of partners … If one cyclist has three or four partners, the chances are he will produce babies with the majority of them. … There is an important need that we enter into that kind of sector and start training those people, the men, the young men involved in that kind of business so that they can also appreciate [family planning].”

It gives me quite a lot of honor, prestige that I’m a champion of TCI. And I think that I need to do more and more to encourage other political leaders to join in.”