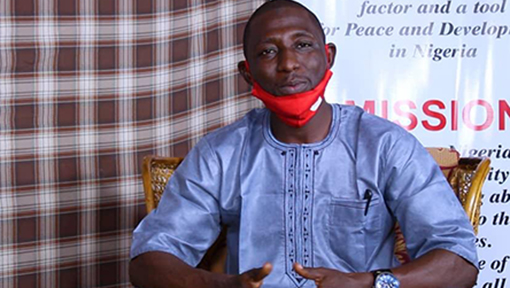 Jamilu Abdullahi is a content developer at Unity FM, a predominantly Hausa radio and TV Station in Plateau State.

Prior to his involvement with the SBCC TWG, Jamilu frowned upon childbirth spacing (CBS) discussions and considered it bad for women to practice CBS. While on assignment covering the health beat for his station, Jamilu says his notions changed completely following an encounter with the SBCC TWG.

After that first encounter, Jamilu began attending TWG meetings and eventually became a member of the group. He shared:

I gained more knowledge when I became a member of the group. It gave me the right tools, messaging as well as insight to dispel myths and misconceptions, which cause the spread of incorrect information on childbirth spacing. I even give religious backings to childbirth spacing messaging as contained in the Islamic perspective, enabling me to convince more persons that using a method is not “haram” as they have been made to believe.”

Jamilu now speaks at mosques, schools and community associations to enlighten more men and women. During the COVID-19 lockdown in the state, Jamilu leveraged his media platform to create radio and TV programs to spur discussion around childbirth spacing since physical meetings were prohibited. He has anchored over 10 radio and TV programs and produced news related to childbirth spacing and its benefits.

Jamilu says he is motivated to continue his CBS advocacy because he wholeheartedly believes lives are being saved through his efforts.