For the past two years, Laxmi has worked as an accredited social health activist (ASHA) in the Ramnagar area of Firozabad city (Uttar Pradesh, India). Laxmi organizes community meetings to promote general health awareness and family planning services. During one such meeting she met Pooja, a young mother whose husband is a daily wage earner. Due to financial constraints, the couple wanted to wait three years before having  another child.

After the group meeting, Laxmi visited Pooja’s home where she sensed all decisions in the household – including what to eat and what to wear – were being made by her mother-in-law, Pooran Devi. Laxmi discovered that Pooran Devi was against using contraception and prevented Pooja from adopting any method immediately after the birth of her infant son.

Laxmi realized if Pooja was ever going to choose a family planning method, Pooran Devi must be involved. Laxmi decided to invite Pooran Devi to the group meeting where attendees discussed the significance of family planning for preserving a women’s health and the well-being of her children. Laxmi ultimately persuaded Pooran Devi by saying:

“You hold such an important position in the family and it is your decisions that have helped your children make wise choices. Family planning is important for the health of your daughter-in-law and your grandchildren, as well as for the financial situation of your family. The best thing you can do is to make the right decision for your son’s family.”

Laxmi also told Pooran Devi about the advantages and side effects of each family planning method. By including the mother-in-law, Laxmi made Pooran Devi feel she was making a decision in her daughter-in-law’s best interest. Because The Challenge Initiative for Healthy Cities (TCIHC) had coached Laxmi on effective counseling skills, she was empowered to handle Pooja’s situation, which is common across India.

Laxmi is disseminating important reproductive health messages among women, men and girls wherever she goes. She firmly believes that in the case of young first-time mothers it is essential to identify and then communicate with the key decision-makers in their households about the benefits of family planning. 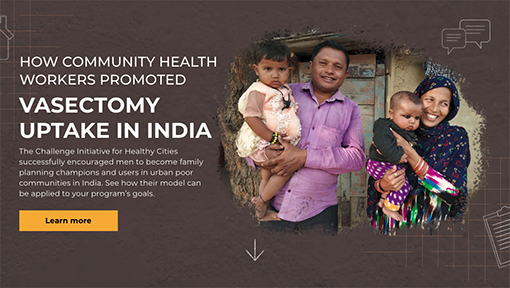